Posters of the Day – Rainbow Eye and Suicide
There were two posters today. We had initially planned on using the poster that clears the log from our black and white eye to encourage people to see in color. News came of another suicide of a gay teen and we moved that poster up in the rotation. Would that it wouldn’t be so pertinent.

Legislative Committees Complete their work
Yesterday we reported a good thing about a sub-committee. Today the full committee reversed that and propose keeping the “incompatible” language. We will see what happens with the body of the whole next week when we get into substitute motions and the limitations of Robert’s Rules.

Reflections on the Day
Some committees found a way to work well together, while all too many have gotten harsher and harsher in their labeling of people. Our GLBTIQ friends have called drug addicts and dealers, practicers of beastiality, alcoholics, genetically deviant, and more. For a community called to “love one another” we have many lessons to learn.
After last night’s service of repentance which is hundreds of years overdue we saw these signs. They are not well crafted, but seem heart-felt. 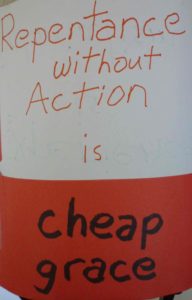 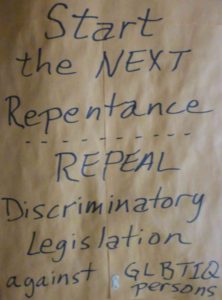